Spanish translation of Mary: A Fiction 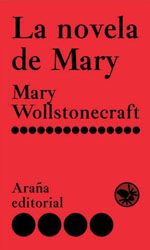 (For the sake of argument, let's take "main books" to be both Vindications, both novels, and the Scandinavian Letters -- and, for bonus points, Thoughts on the Education of Daughters and Original Stories from Real Life.)

Well, as of this spring, the hundred million (or hundreds of millions of) Spanish speakers, or rather, readers, have access to Mary: A Fiction in their own tongue. We've looked before at Chihiro Umegaki's project to provide a Japanese context in which to understand the 1980 translation of Rights of Woman. We've looked at Jonathan Bennett's noble undertaking to render it and other works of philosophy into clearer English. Now we can look at a straight-forward literary translation.

According to the article in El Mundo, Arana editorial (which I'll call Spider Press, until I can find a tilde) has published the first translation of Mary: A Fiction into Spanish. (Well, it said Castilian, and I had to go and look it up to make sure that I wasn't getting my Basque mixed up with my Catalan. Wikipedia has a fascinating essay on the political and cultural nuances of the names given to the Spanish language, fascinating, that is, to anyone sensitised to their choices of linguistic terminology. Montrealers, for instance. -- Damn, no accents on this keyboard, either.)

Check out the cover, by the way. Is anything like that published in your country today? There's no way that would be given approval in Britain or North America, not now. Far too bleakly graphic. We want photos! Or, failing that, paintings!

La novela de Mary was launched during the Valencia Book Fair, with the help of Casa del libro, The Book Shop, a chain founded in 1923 and now with 29 shops across the country. (In the process of preparing this post, I came across what I took to be a nice little Easter egg . Maybe an engineer's idea of a Friday afternoon gag? If you take the first paragraph of the corporate "who we are" page, and run it through Google Translate, you find that Casa del libro has branches in a dozen cities across Spain -- oh, and two in England. That's correct, it turns "Bilbao" into "Liverpool". Also, for reasons best known to itself, Google Translate keeps the Spanish accents in its English version, and renders librerías as libraries, instead of bookshops. So there is still plenty of room in the world for human translators.)

You can see some not very good photos of the human translator here, whose name is Bárbara Martínez. (There is another one, Jonás Morell, on the cover of the book but not on this panel. Maybe he was in Liverpool.)  Their work was revised (checked? edited?) by Josep Marco Borillo, professor at the University Jaume I of Castellón, who also wrote the introduction. He praised the literary values of the work and explained that Spider Press decided to commission the translation because its editorial line has a strong social component. Martínez performed the literary translation of Mary as part of her practicum -- in what exactly, it isn't clear.


The report on the book fair explained how Mary Wollstonecraft was both a proto-feminist and a proto-Romantic, as evidenced in this novel. The article in El Mundo also gives a recap of her life, but begins by saying that even the British have trouble pronouncing her name.


Digression:
Valencia Book Fair (Fira del llibre) is a good plain clear name. Here's an idea for the organisers of next year's North London event of choice: if it were called StokeyBookFair right from the get-go, instead of Stoke Newington Literary Festival, it wouldn't have to clip its wings to the Orwellian concatenated abbreviation of StokeyLitFest. Long names are in! Like the Working Gentlemen's Comedy Club I didn't quite get to last week. #TheTwitterBacklashStartsHere #resist140fascism
at 21:26