Mary and the happy historian

A week ago I wrote about a Twitter interview with Leon Heuts, the philosopher-journalist who will be introducing Mary Wollstonecraft to Dutch Humanist TV. That reminded me that last autumn I had another fruitful exchange with a self-professed "happy historian graduate geek", Dominic Self, aka @reddalek. He was given £100 in book tokens, lucky chap, and spent them inter alia on a two-in-one volume of the Vindications, sensible chap. (And Wodehouse. And A luscious-looking hardback Arthur Conan Doyle. And a handful of Very Short Introductions. Et cetera. Well chosen, youth of today.)

He drew my attention by writing "Mary Wollstonecraft is admirably blunt. I like this." (Admirably succinct. I like that.) We saw earlier that her writing is often considered difficult or well-nigh impenetrable by those who are most likely to be required to read her: from American high school civics classes to British undergraduate historians, students typically find C18 essayists hard going.  (Hence the need for the excellent work by Jonathan Bennett on early modern philosophers.)

So here is a recent graduate who actually enjoys her essay style: of course I was bound to want to find out more. He decided it was a bit of a laugh, and interviewed me for a so-called 60 second seance, a parody of the 60-second interviews that appear in the free rags such as Metro. From his blog


There are so many layers of geekiness to this story I'm not really sure where to start. But anyway: you recall that I bought a load of books and then facetiously suggested that I would feature Mary Wollstonecraft as the next celebrity on this blog? Well, after starting to read her works I got a tweet from the woman herself agreeing to an interview, which is a pretty significant scoop for someone who died in the eighteenth century. But hey, if Psychic TV can flourish, why can't I? 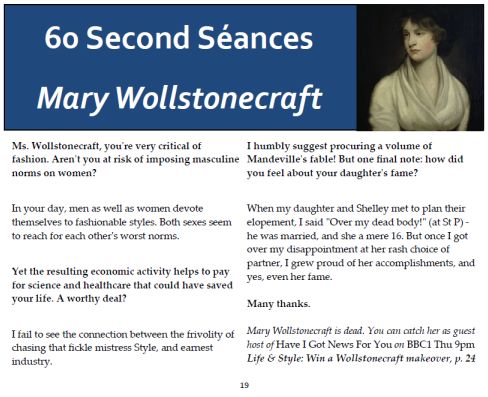 You can't believe how proud I am that I figured out
how to get Dominic's interview to display correctly.

Here's a fuller version of our intercourse, in the eighteenth century sense. As last time, Bettween interposes an anomaly: in preview, I can see a misplaced tweet  -- "A charming young Londoner and historian has seen fit to interview me" -- showing its correct date but quite jumbled between earlier and later tweets. No way to fix this. Remember, you can scroll down within the conversation, using the slide button at the right.