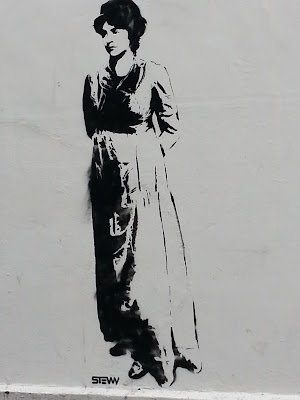 Mary Wollstonecraft has appeared on the side of Newington Green Unitarian Church, on Mothers' Day and on the extended weekend of International Women's Day.

No sign of her on Saturday, when the walking tour got to hear her story at the beginning of "Feminist Hackney - Or Is It?". But when the congregation arrived on Sunday morning, she had (to their delight) manifested quite serenely and beautifully on the exterior west wall. This is the church that radicalised Mary Wollstonecraft, that helped this unpublished 25 year old schoolteacher, with no family or money or even a proper education herself, realise that she could make a mark on society. This is the community that introduced her to a wider intellectual sphere, and to the publisher who nurtured her for her ten brief years of productivity. This is, as the local history says, The Village that Changed the World.

Church Walk is now an alley, but in her day would have been a lane through a mile of farmland to Stoke Newington and the resolutely non-Dissenting St Mary's Church. All these fields were swallowed up by the relentless Victorian sprawl of London, but those with eyes to see can spot the history under our feet.

The image is clearly based on the last John Opie painting, when she was pregnant with her second daughter, known to history as Mary Shelley.  You can see the head and shoulders in the National Portrait Gallery, thanks to Bob Lamm liberating her from basement interment, or indeed in the nearest pub to the church, larger than life in the Dissenting Academy, but if you want to see the full-length version in the fresh air, I'd advise you to hurry. Who knows how long Hackney Council will allow her to stay? I've heard they take a dim view of street art, unlike neighbouring Islington. We shall see.

The wall stencil is signed STEWY. I hoped it might be a culinary reference; I was cycling into an unseasonably bitter wind and snow flurries this morning, so my thoughts naturally turned to well-seasoned eighteenth century winter stews. Apparently Stewy is a man, albeit a shadowy one. He has given a few interviews over the years, from which I glean that he trained as an illustrator, was influenced by Banksy and Blek Le Rat and their rodents, and decided to do 26 indigenous animals: F for fox, P for pigeon, etc. His politics are of the Billy Bragg variety* (with an extra dose of charmingly naive idealism) and his imagery is simple, full of character rather than narrative. His bare-bones tumblr is here.

From animals Stewy graduated to people, putting Quentin Crisp near Canal Street in Birmingham, Tracy Emin in Margate, and John Cooper Clarke in Salford. (For those not familiar with them: England's stateliest homo, no-longer-YBA enfant-terrible EMINence grise, and punk performance poet.)


I wanted to do something different so I had this idea like the [English Heritage] blue plaques.... I would only spray my people where they had an association, where they lived or were born or worked or died. And most of them that I have put up have remained which is great because they are obviously relevant to the people who live in the area, there is a sort of respect.

That was from the interview by Ken McGregor of the Australian Metro Gallery. (Mary Wollstonecraft has several plaques in London, including one on Newington Green.) Stewy went to a Manchester pub with Tom Balderstone and expounded some more:


I deliberately do underdogs or the people hidden or just behind the scenes. The people who haven’t really become famous....[With one of his images] loads of people come up asking who he is, not their fault, so it’s kind of educational; almost historical/geographical. In school I had an interest in both but I couldn’t do history, got a B in geography and I liked art, so it all came full circle and now I’m pulling that all together. I might do a map one day, and try to plot it all. But by then the pictures might have gone.

He also spoke to Joe Bill of Kent News about the future of street art, it becoming a positive force in society. "It’s not about me. The work highlights people or eccentrics who made a difference - changed how we approach art, music or writing - pushing the boundaries in Britain and shaking things up a little."

Stewy calls his combination of people in their context "psychogeography". So now we have a psychogeographic Mary Wollstonecraft, back in her old neighbourhood, looking straight at us. "Like a ghost across the street", a line from Blek. There she is. Thanks, Stewy.