Yesterday I attempted to back up the claim made in my previous post "A Flurry on Twitter". However, my enthusiasm leaps ahead of my technical know-how. The sharp-eyed will have spotted that yesterday's screenshot showed a request from me, not a response from Margaret Atwood, about Mary on the Green, dated 9 May. Via the @maryonthegreen account I created last year, I had asked the international best-selling author and celeb-Tweeter to spread the message to her 200 000 followers about "our campaign for a London statue to Mary Wollstonecraft". I saw my error this morning, and thought about deleting the post, but that seems shady. So, instead, mindful that one of the purposes of setting up this blog is to teach myself blogstuff, I'll explain what I did next.


First of all, I went to Margaret Atwood's Twitter page. Her account is @MargaretAtwood, and the home page has that reassuring blue tick on it, the imprimatur of official verification. Besides, we all know that Canada's favourite septagenarian enjoys running her very active account, because she wrote most amusingly last spring on The Guardian's Comment is Free about "How I learned to love Twitter" and the New York Review of Books (foot note) about much the same thing -- "At first I thought it was for kids, but I was soon hooked. It's like having fairies in your garden". Or, it's "like having 33,000 precocious grandchildren" -- except now there are 200 000 + of them, most of whom we can assume to be "fairies", helpful invisible well-wishers.

On that page I scrolled down endlessly and tediously, for more than a month (and it felt like it), to find the tweet in question. CTRL + F doesn't work, and I don't know of a specific search tool that would do the job; all the tip pages start with the assumption that the desired message has already been found. Eventually I got this, below: the shaded message is the one we're concerned with, in the left-hand list, with a larger version of it in the right-hand pane.  (On the real Twitter page, though not on this static screenshot, when you click on a message, the bigger one is triggered to open.) There are two indicators that MA did indeed forward my request. Look first at the ordinary sized tweet in the left-hand column. The pair of square-circular arrows, followed by the words "by MargaretAtwood", mean "retweeted by". So that's all right then. But there is another way of ascertaining the same thing. Look now at the right-hand pane. Underneath the message, it says "Retweeted by MargaretAtwood and 48 others", with nine avatars. Again, in the live page, you can mouse over the thumbnail images and see who they all are; on this static page, you can at any rate be sure of the number. 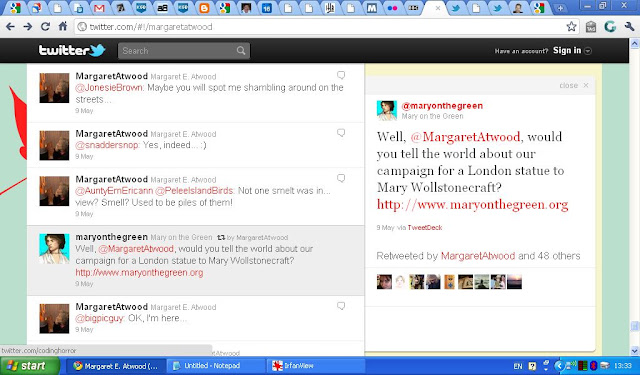 Now here's another way of confirming the same thing, in theory, although not in this precise case. You can go to my campaigning account, @maryonthegreen, and find my request. (Again, tiresome scrolling. There is a better option that we'll get to later.)


Well, @MargaretAtwood, would you tell the world about our campaign for a London statue to Mary Wollstonecraft? http://www.maryonthegreen.org

The full image is below. At its bottom, you'll see it says "Retweeted by kakennedy and 48 others". As far as I can tell, @kakennedy just happens to be the last person to forward my request, and as such her name appears, and her avatar is the one to the extreme left. Again, we can only see a small proportion of the whole number of avatars, and again, in the real web page you can mouse over them to see more names, but not in this static image. Because so many people quickly followed MA's excellent example (48 divided by 200 000 -- let's not think about it), her avatar is no longer visible, buried under the later-comers.  Had there been 14 or fewer retweeters, they would all have remained on the top page. 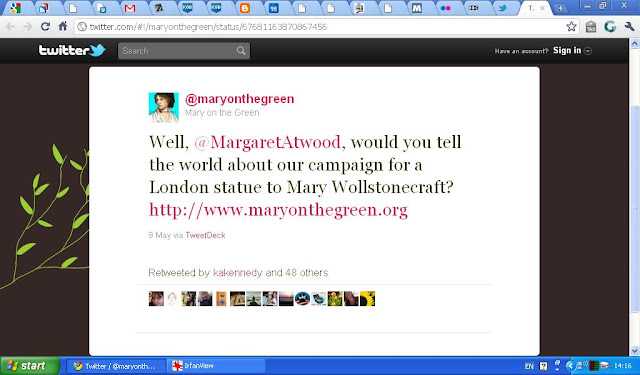 Notice that in the address bar appears a URL identifying this particular tweet within the @maryonthegreen account. You can't copy it from the screenshot, of course, but you can type it into another browser or session, and find the tweet again from anywhere. Or, you can use Google. Ah yes, that great search engine in the sky! Finally we come to Google.

Below is the Google search result for "Twitter maryonthegreen MargaretAtwood". My tweet to MA shows, first up, which is great; but her retweet, not at all, weird. A couple of Twitter accounts I've never heard of are #2 and #3. Another of my accounts is at #4, which I guess is good. Media stuff about MA is #5-7, which is weird again, because I can tell you, there is no mention of Mary on the Green in the NYRB: would that there were. The last entry we will cover at the end of this too-long post. So, the moral is, you would think that Google Is Your Friend, and any old tweet you've misplaced, or remember reading a couple of months ago, must just be lying around waiting to be jumped on and tickled by California algorhythms: not so, dear reader, not so. Google provides no quick proof that MA did RT my request. (True, I haven't trawled through the other 150 results for that three-item string.) 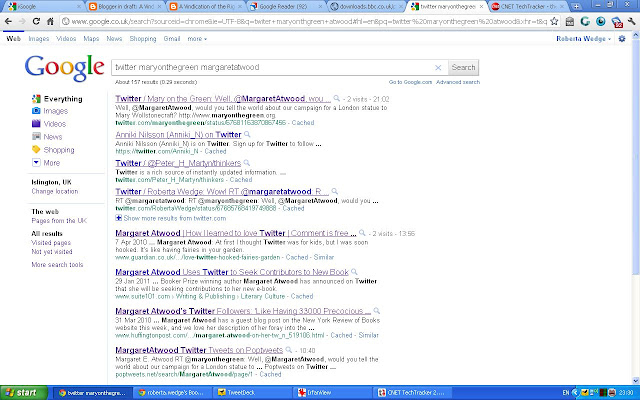 Now, the last item, below. This is a bizarre work-around. A site called Poptweets sort of archives Twitter. I say "sort of", because it found  MA's RT, i.e. the particular piece of ephemera for which I want proof, but then when I tried to go to the permalink: "Move Along, Nothing to See Here! You may have followed a bad link or a gremlin may have gotten into the system." So, there is screenshot proof, but not URL proof. 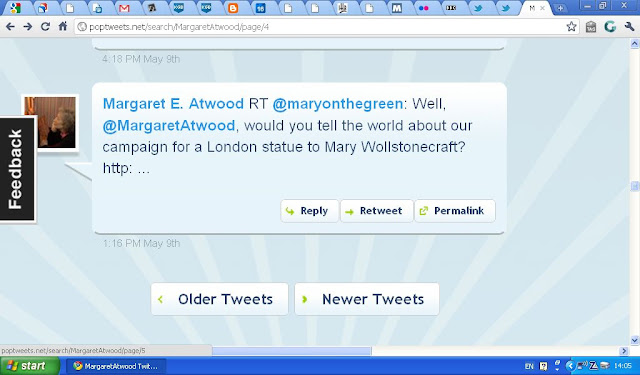 Notice that in none of these examples am I signed in to any account or any service (e.g. see the top right-hand corner of the Twitter pages). All of this is open to everyone. Twitter is, by default, a public conversation.

One last thing I tried, on what has for me been a tiringly techy day: Blackbird Pie, an experimental service to bake a tweet into a blog, to set before the Margaret King, or something. But again, it starts by assuming that the URL is to hand. It wasn't, at the point when I needed it, so Blackbird Pie did me no good. Maybe another day.

All that, to get a flicker of attention from a celebrity? All that, merely for a potential supporter of Mary on the Green? No, I tell myself: all this is in quest of self-education. Our Lady would approve, I think.


Photo: By Lesekreis (Own work) [CC0 (creativecommons.org/publicdomain/zero/1.0/deed.en)], via Wikimedia Commons
Footnote: 7 April 2010  -- I'm starting to write dates in, as a Good Habit, in case digital artifacts later vanish.
at 12:18

Email ThisBlogThis!Share to TwitterShare to FacebookShare to Pinterest
Labels: blogstuff, Mary on the Green