The Fawcett Society wishes to find out more about Mary Wollstonecraft, and you are all invited: a week today, Tuesday 8 November, 7pm at Newington Green Unitarian Church, where Mary was radicalised. Dress warmly. The official announcement of this free, open, public meeting is here.

Technically, it is not Fawcett itself that will be soaking up the Wollstonecraft atmosphere that evening, but the East London branch, possibly with their North London sisters. (No doubt they will all take turns, sitting in Mary's pew.) Why do I call the Fawcetts "formal", aside from my woeful weakness for alliteration and allied alphabetical amusements? (And MW wasn't strictly speaking the first feminist.) Because they are the respectable face of British feminism, so much so that they don't even use the f-word. "Fawcett is the UK’s leading campaign for equality between women and men. Where there's an inequality gap between women and men we're working to close it." They lobby Parliament -- effectively. They wear suits and ballgowns, metaphorically and for all I know literally, and they Get Things Done. All power to them.

As consummate campaigner and secular saint (enough already! - Ed.) Peter Tatchell pointed out, street activists recognise the value of committed negotiators who can get inside the establishment and talk to the power brokers in language they understand. What those who risk arrest don't like is when the besuited intermediaries ignore or belittle their contribution. Without OutRage! noisily and creatively demonstrating, Stonewall wouldn't have had its phone calls to MPs returned, or so went his argument. OutRage! acknowledged this interdependence but Stonewall didn't, or so he said, way back when. See Animal Liberation Front and RSPCA; see Black Power and the civil rights movement; see toffee-hammer-wielding suffragettes and patriotic patient persistent (I said stop! -Ed.) suffragists. I don't know the precise parallel to gender issues -- Riot Grrrls got co-opted into commercial music*, Guerrilla Girls never made it to the National Gallery -- but at any rate, Fawcett is the Stonewall of feminism, and they do what they do very well. "We make real differences in women’s lives by creating awareness, leading debate and driving change. Our lobbying power means we have real influence right at the top of UK politics and among those who make decisions."

The Fawcett ethos is one of liberal reform: "Our vision is of a society where women and our rights and freedoms are equally valued and respected and where we have equal power and influence in shaping our own lives and our wider world." I like to think its members would sit well with the Rational Dissenters of Newington Green, the ones who opened a young schoolteacher's eyes not to the injustices of the world -- she was well acquainted with them already - but with the political dimensions to these injustices. "We campaign on women’s representation in politics and public life; on equal pay, on pensions and poverty; valuing caring work; and the treatment of women in the justice system."

I'll do my show and tell (as I did a year ago at Ignite -- so sad to be missing this autumn's version! -- but if you haven't got tickets by now, you have no chance anyway, so might as well come along to Newington Green). We'll certainly cover the latest developments with Mary on the Green, and perhaps trade campaigning tips. The quiz on Mary (and democracy, and wonderful women worldwide) which I devised for my visit to the neighbouring Stoke Newington WI will not, after all, be reprised -- or not on this night. There is another event coming up, however...stay tuned. 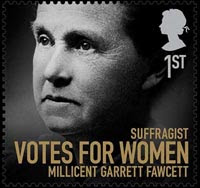 The final reason for my fondness for the Fawcett Society is historical: "We trace our roots back to 1866, when Millicent Garrett Fawcett began her lifetime’s work leading the peaceful campaign for women’s votes."  This was the woman who wrote the introduction to the centenary edition of A Vindication of the Rights of Woman, cleansing Mary's memory and claiming her as a forerunner of the suffrage movement:


The remarkable degree in which she was ahead of her time is shown on almost every page of "The Vindication." She claims for women the right to share in the advantages of representation in Parliament, nearly seventy years before women's suffrage was heard of in the House of Commons. She knows that few, if any, at that time would be found to sympathise with her, but that does not prevent her from claiming for women what she felt was simple justice. She also perceives the enormous importance of the economic independence of women, and its bearing on social health and disease.

I claim MGF as a Lost Daughter.


The 1891 intro is here. This version (held by Keele) seems to start mid-essay,
and I can't find anything better at the moment.  Images from the Fawcett Society ,
One War Art for the Riot Grrrl Manifesto, John Gray's blog for the stamp,
and Guerrilla Girls for the satirical movie poster.
at 23:12