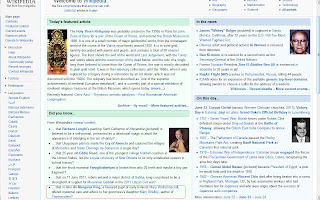 Not so lost, this one -- not compared to Voltairine de Cleyre. But still, hardly a household name. A step towards rectifying this: she is on the front page of Wikipedia as I type. (Screengrab, with the "Did you know" lassooed in red, courtesy Devoted Reader.)

Margaret King was one of the girls taught by Mary Wollstonecraft. She was a favoured pupil, in fact, and the two stayed in touch for years after the governess had to leave Ireland. She married young (though not as young as her heiress mother Caroline Fitzgerald) and, as Lady Mount Cashell, undertook a well-financed Continental tour, stopping in Paris for the first nine months. They entertained lavishly, as documented by her friend along for the ride, Catherine Wilmot, whose diaries were eventually published as An Irish peer on the continent (1801-1803) being a narrative of the tour of Stephen, 2nd earl Mount Cashell, through France, Italy, etc.  (Is 117 years some sort of a record? Fulltext, worth waiting for, here.) She decided to give this up for love, and went off with an agronomist called Tatty Tighe.


As Mr and Mrs Mason, they settled in Pisa and lived there happily for decades.  The name was chosen deliberately; it is that of the maternal figure in MW's first book,  Original Stories from Real Life.  At some point she studied medicine. Mrs Mason was able to extend her maternal and medical care to MW's daughter Mary Shelley when the young woman, pregnant again, came through Italy with her husband the tousle-hair'd poet and her step-sister Clair Clairemont (whose parentage we looked at the other day).  Thus the kind solicitude was passed down the generations: CC stayed in touch with Mason descendents into the 1880s.


Janet Todd's Rebel Daughters tells her story, and I'm sure the biographer of MW has done a good job looking for sources. But perhaps we may hope that one day an inspired amateur will turn up some more primary information, and a whole book may be devoted to this fascinating lost daughter.