This is the second in a series of Wednesday walks. The first took in Mary Wollstonecraft's life in Somers Town.

From the Polygon plaque it is a five-minute stroll to St Pancras Old Church, allegedly the second oldest site of Christianity in England. (Not to be confused with the almost-Ancient-Greek caryatids of St Pancras New Church on the Euston Road.) The building itself is a little gem; Victorian Web calls it "a small church with a big history". The churchyard too is rich with cultural and literary references;  Dickens name-checked it in A Tale of Two Cities as the site of night-time "fishing" (body snatching). 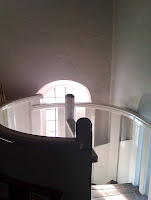 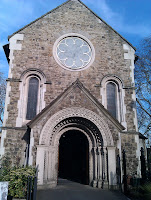 According to Chesca Potter's 1990 booklet Mysterious Kings Cross, the church was "only open to the general public on the Sunday nearest to St Pancras Day, May 12th", but that has now changed: the main doors are open almost every time I walk past, and glass ones behind cleverly signal open-ness. The small building is buzzing with life. The venue is listed in Time Out, and when we wandered in a band was rehearsing, presumably Porcelain Raft. The spiral staircase was unlocked, so we explored the library upstairs, with its overstuffed armchairs, and its pamphlets on the history and spiritual significance of aspects of both the church and the churchyard.

St Pancras Church was substantially rebuilt in the middle of the C19, and we tried to figure out what Mary would have recognised: the C6 altar stone, for a start, and an C18 font cover. Here she and Godwin married, something that soon drew disapproval: in declaring herself "a spinster of this parish" she was admitting that there had been no ceremony between her and Imlay, and thus that her first child was a bastard; and Godwin had written against the institution of marriage as it existed, so he was perceived as going against his principles.

And then outside, to try to find Mary's memorial. It is doubtful how much she would have recognised: some items (especially gravestones) have moved, and many (especially tombs) post-date her death, viz the Burdett-Coutts memorial sundial, the image to the left. (The "richest heiress in England" was another woman devoted to her female companion, even unto death. A couple of years after Hannah Brown died -- "my poor darling, the companion and sunshine of my life for 52 years" -- Angela B-C married a man, eliciting scandalised raising of eyebrows. When I was showing a queer activist around town, she called this the Famous Dead Bisexuals Corner.)

The churchyard was much bigger in the C18, and was surrounded by fields (cf St Martins in the Fields, the church at Trafalgar Square). When the Midland Railway was being built in the 1860s, the line decided upon ran right through the cemetery, so the bodies, or whatever remained of them, had to be respectfully moved. The chap deputed to do this was none other than the young Thomas Hardy, who, after completing this distasteful task, decided to pursue a career in literature instead. He left to posterity not only the books by which he is so well known, but also the Hardy tree.  Other highlights of St Pancras Churchyard are the Soane Monument, for its design (which is supposed to have inspired the iconic red pissoirs telephone boxes), and, for their associations, the Rhodes family tomb and the grave of the last survivor of the Black Hole of Calcutta. All of these are post-Mary, though she may have seen Soane's early work on the Bank of England, so near her publisher at St Paul's Cathedral. 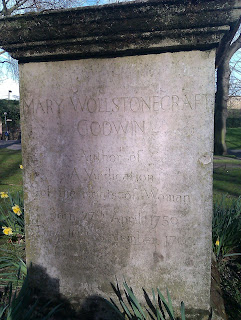 The stone bearing Mary's name is not what the unwary might expect. First of all, it is not hers alone. Godwin erected it soon after her death and, demonstrating an accurate judgement of how history would remember her (a judgement so singularly lacking when he rushed into publication of the too-much, too-soon Memoirs), he had it inscribed thus: 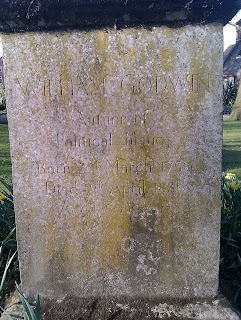 When Godwin died, nearly four decades later, he was buried in the same place, and his entry was carved on another face of the square, rationalist marker. His second wife survived him by five years, and she too gets one surface. (The final face is left blank; had he needed a third spouse, there was space.) With so many divorces nowadays, will we see a trend for multiple occupancy burial sites?  Polyamorous posterity?

(Mary Jane Clairmont, nee Vial, deserves a word. She comes down to us as yet another of history's wicked or at least unlovable stepmothers; young Mary cordially disliked her, poor Fanny committed suicide, and her own daughter ran away from home to seduce a celebrity. But she was "the only female publisher of substance in the London literary world of the early 1800s" and "in her business acumen, something of a bulwark against the financial improvidence of her husband", according to the University of Pennsylvania's Frankenstein project. It is too easy to dismiss or forget her. Had Mary lived, they would have been neighbours, and moved in similar literary circles. It is not hard to imagine them collaborating on a children's library.)

The second surprise, for those who haven't done their homework, is that Mary does not lie here. Her bones (and those of Godwin, but not, as far as I know, of his second wife) were moved to Bournemouth. Why Bournemouth, I hear you ask? What possible connection did Mary have with the South Coast? Well, precisely none. Field Place, near Warnham, West Sussex,  was the ancestral home of her tousle-hair'd son-in-law. The poet's conventional and unliterary son (MW's only grandchild) eventually inherited the estate, but chose to purchase and extend Boscombe Manor, near to Bournemouth and soon surrounded by the growth of the seaside resort. His ailing mother and genteel wife both got along well, and since Mary Shelley wanted to be buried with her parents, and Jane and Percy judged St Pancras entirely unsuitable as a resting place (the church was in a sad state by the mid C19, surrounded now by slums instead of fields), the solution hit upon was to move the distinguished ancestors. Hence Mary Wollstonecraft and William Godwin were whisked away from the insalubrious air of Dickensian Kings Cross and reburied amid the bracing, albeit incongruous, sea breezes of Bournemouth, where the whole happy family can be visited at the Shelley family tomb at St Peter's Church.

(The connection between the Marys intrigues me. One died, and the other was born, with the same name: Mary Wollstonecraft Godwin. The daughter called herself Mary Wollstonecraft Shelley for much of her life, clinging on to her mother's name even after discarding her father's. What did that mean to her?) 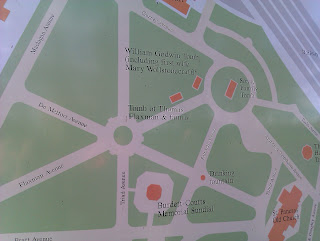 Beyond being removed from the parish of her happy final months, there's a further indignity Mary suffers. The church no longer is responsible for the churchyard, having passed the grounds to Camden Council, who run it largely for the benefit of dogwalkers. Next to the rather magnificent and seriously underappreciated gilded gates sits a placard explaining the gardens. It gives Mary only parenthetical mention, as Wife Of Important Man. I think another campaign would not go amiss...

Now it is time for tea and a sit down.There are two ways out of the gardens: return the same way, walk to the near (rear) end of St Pancras Station, and cross through it (not along it), coming out the other side; OR, out the smaller ungilded gates on the other side of the gardens, turn right under the huge railway bridge, passing Camley Street Natural Park on your left (which abounds in delightful places to sit down but is entirely devoid of tea, unless you had the foresight to bring your own thermos), and walk parallel to the railway lines. 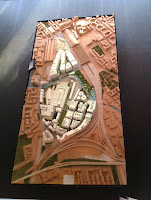 In either case you will find yourself within a few minutes at the German Gymnasium. This 1865 brick building is now the marketing suite for Kings Cross Central, who are overseeing the enormous changes in the area. There is a small display on C19 radicalism in the neighbourhood, a terrifying maquette of future developments, and, best of all, the structure itself, bearing a distinct resemblance to the engravings here. 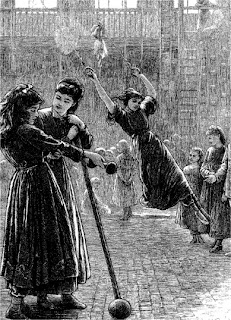 Nothing to do with Mary? True, it was built long after her death, in the blaze of German-philia that accompanied Queen Victoria's consort, along with Christmas trees from the Teutonic forests. But surely she who wrote "I wish to persuade women to endeavor to acquire strength, both of mind and body" would have rejoiced at the purpose and management of the building, for, according to the KCC website, "the German Gymnastics Society adopted a forward thinking approach to women’s exercise, with classes taking place here from as early as 1866." Upstairs there are sometimes exhibitions, and if not, you can imagine exhibitionists flinging themselves acrobatically from the stupendous rafters. 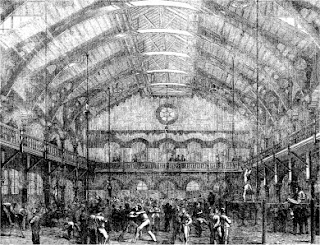 Now: tea. Quick march: through Kings Cross mainline, out the front, turn left, cross the lethal York Way very carefully, march along Pentonville Road ignoring bang bang bang McDonalds Starbucks Pret, turn left into the warren of refurbished warehouses phoenix'd as trendy offices, walk past the Spanish-ish tapas place and its decorative barrels that I cynically bet never held sherry, out the other side past the beautiful but ill-sited labyrinth on the wall (I like the melted computer keyboard), turn immediately left and up the steps to Drink Shop Do. You have arrived. If you need the loo, it's downstairs, shared with the neighbouring well-lit and friendly gay sex shop. NB amusingly worded warning notice on the door, for the benefit of the ladies with hairdos who are passing time till their train back to Yorkshire.

When you are refreshed, the next Wednesday walk takes us to St Paul's and Southwark.
Tomorrow: Mary's sons and daughters

Photo credits: all by Asa Norling, except the Camden Council placard, by Chihiro,
the two engravings of the German Gymnasium, by kind permission of Kings Cross Central,
and the Burdett-Coutts memorial sundial, by Jacqueline Banerjee, of the Victorian Web.
at 08:32