A few days ago I went exploring, with Chihiro Umegaki, the Japanese historian mentioned earlier, and the Swedish performance designer Asa Norling. (Åsa had read the Scandinavian letters, and commented that Mary hadn't much liked the Swedes. I reassured her that she didn't think much of the Portuguese or Irish either, from her sojourns in those countries, and when she was in France hung out mostly with Americans.) Our little tour was mainly a Wollstonecraft pilgrimage, but I used it as an excuse to look at sculptures and other public art as we passed them, comparing good and bad examples that might feed in to Mary on the Green. This post is the first in a series describing what I shall call Wednesday walks.

The three of us met under the skirts of the goddess in St Pancras Station, that is, at the feet of the biggest and ugliest statue to have disgraced London in the last decade at least. It has its plus points: there are benches, it is right at the head of the station, it is a convenient place to gather -- especially to arrange to meet people who might not know London all that well. Anyone can find it: no one could miss it: I, however, wouldn't miss it at all. In terms of aesthetic appeal, I give it nil.

If you look closely, and use a little imagination, you'll see that the speech bubble above Brief Encounter says "Welcome to London, home of heteronormativity!" Fortunately, you don't actually have to look at the embracing couple, as they are too high to peer at without serious neck craning (unless you *really* want to look up her skirt, and be disappointed). At eye level, on the frieze around the base, are much more interesting figures, small, rich, detailed. (NB not shown on this photo, as they were added later.) Not really bas relief -- maybe medium relief? They are somewhat of a relief from looking up. Hard to believe the two works are by the same artist, Paul Day. There's a long explanation of the statue by him, archived on the BBC site; the comments from the punters are polarised, to say the least. OK, it's quite a feat of engineering, as The Evening Standard photos show, but that isn't what it is being judged on. It's supposed to be a work of art.

[Addendum: that indefatigable London explorer IanVisits has written up the frieze of commuters.] A few steps away is the charming statue of John Betjeman, which is so utterly appealing. This bronze, by Martin Jennings, is just over life size, and sits on the ground rather than a pedestal, so that tourists are often to be seen photographing themselves with him. The poet is clasping his hat in a breeze, his coat billowing, looking up at the station he campaigned to save; I am reminded of Sir Christopher Wren's epitaph in St Paul's Cathedral: "Reader, if you seek his monument, look around you." There's an article by Jennings in The Guardian, setting Betjeman and the project in context, and a description of the process of its creation, with photos along the way, at the artist's website, with various quotes.

Jennings's Betjeman - the best statue I've seen of a well-known figure - is so bright, so visually striking, that it's possible to believe that he actually embalmed the poet in bronze. Betjeman is so realistic that you think he's about to walk down the platform.
Duncan Hamilton, Yorkshire Post.

There is a trail of the poet's words leading up to his statue, carved into slate discs set into the floor and forming its base. It is definitely site-specific art, and also that most traditional of forms, a representational statue of an individual. I could wish for nothing better as a tribute to Mary.

We leave the station and walk along the noisy Euston Road, or the New Road as Mary would have known it. The M25 of its day opened in 1756 as a bypass around the amalgamation of the City of London and Westminster, and all their accretions up to that date. We pass the British Library, which was then housed within the British Museum; Mary lived within spitting distance of it on Store Street, but, I believe, would have been forbidden access on grounds of being a woman. Perhaps we will get to Bloomsbury on a future walk. On the other side of the Euston Road is St Pancras New Church, "new" only in the English sense of being almost 200 years old. Godwin would have seen its contentious and expensive rise. 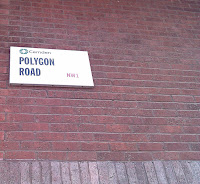 Just past Chalton Street Market we turn into Churchway, its wiggliness a good indicator that the road pre-dates the grid layout around it. The name for this immediate area is Somers Town, as in the recent film made in honour of the Eurostar arrival. Somers Town stretches north towards Camden Town, but most Londoners know the area simply as St Pancras, originally after the church, or as St Pancras/Kings Cross, after the adjacent train stations. A couple of minutes' walk takes us to Polygon Road, named after the buildings in which Mary spent her last months, happy with Godwin and her work, and where she died.

We pause to gaze at a large mural on the side of a school. It is hard to appreciate the detail of the painting, as it is obscured by a high chain fence, but here's an image. Claire Tomalin, author of The Life and Death of Mary Wollstonecraft (2004),  lobbied in1992 for its retention, calling it "probably the finest in London":

...in 1980 the GLC [Greater London Council, abolished by Thatcher] commissioned the London artist Karen Gregory to paint a mural on the wall of a school to celebrate the history of the district and its famous residents...It offers a journey through time, drawing on the styles of many artists; Stubbs, Constable, Gainsborough, Ford Madox Brown, Sickert and Gilman. Old St Pancras church is in the background, surrounded by hay fields. The Fleet river runs by under an elm tree. Beneath it are seated the figures of William Godwin and Mary Wollstonecraft, who belong to the earliest period of Somers Town's history. Their daughter Mary is shown as a young woman, with her husband Shelley, sailing paper boats from the bridge over the Fleet, while behind them appears the head of Frankenstein's monster.

Her campaign was successful in raising funds for its restoration; it was moved in 2007, according to the London Mural Preservation Society, and its amended version includes not only the head teacher but Tomalin herself.

Opposite the mural is Oakshott Court, more or less where Mary's last home would have stood. An engraving of the Polygon depicts the circle of buildings, a speculative development in the middle of Clarenden Square, as very attractive. The church on the right hand side might be the one that Churchway leads to, but I see no sign of it on Greenwood's 1827 map. By that point the area had gone downmarket; Charles Dickens lodged there as a boy, and put the Polygon into Bleak House in 1852, as the home of a down-at-heel eccentric. The 1952 English Heritage survey says "Horwood's map of 1799 and Tompson's map of 1803 show the Polygon built in the fields with a circular road round it." That would accord with Godwin's description of walking home across fields, to what were then buildings only a couple of years old: desirable, purpose-built residences just outside the pollution of London, but conveniently close. This was still an age when everything needed to be within walking distance, unless you were rich enough to keep a horse.

After walking all the way around Oakshott Court, we find the brown plaque to Mary, erected by Camden London Borough Council, prodded by Claire Tomalin. "In a house on this site..." In the London Review of Books in 1989, Tomalin says:

‘Mary Who?’ is still the common form of her name, outside a small circle of specialists and enthusiasts. People stumble over the three simple syllables; its awkwardness has stood in the way of her fame. Pankhurst has an easy ring to it, and Mrs Pankhurst got a statue. When I set about organising a modest plaque on the site of the house in which Mary Wollstonecraft died in Somers Town, there was talk of naming flats or even a street after her: but again, those three syllables defeated too many people.

Next Wednesday's installment: to St Pancras Church (and tea).