Mary and the Undead 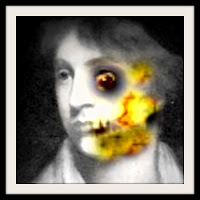 Fridays are for creativity. This blog likes to highlight some of the imaginative projects that people have come up with, that celebrate or spring from Mary Wollstonecraft and her life and works. We've seen a tattoo and a series of Wordles and a photomontage. And it's not just images: much of the creativity is of words too, written projects such as a cycle of poems.

Today we have the Undead. The teenage Mary not only meets and defeats them, she begins to formulate the fundamental concepts of equal rights that lay the groundwork for her masterpieces, A Vindication of the Rights of Men (1790), Woman (1792), and Zombies (179?). All this is channelled by Sandrine Berges, when she isn't teaching or writing serious philosophy. But don't worry; there's a higher purpose, e.g. "it's all about the social commentary and ethical reflection", or, what do zombies say about us.

A brief sample in the words of our precocious heroine. First, the trip to the North of England in difficult circumstances.


Our journey, from a village in the south of London, took three days - which was very good going – mostly because we were being chased by zombies for a large part of the way. There are no zombies where I come from, but I dare say that my own upbringing did much to prepare me for dealing with the foul beasts. I do not wish to trouble you with my complaints but let he be said that I believe that it is more remarkable that I should have survived living with such a family as I have for nearly sixteen years, than that I should have successfully fought off zombies for three weeks and three days.

After some unspecified time, the Wollstonecraft family goes back to London, leaving the zombies behind -- or so they think. This post explains the fate of Mary's younger brother Henry, who disappears from the canonical accounts.


We are not supposed to speak of him. If we are asked directly, we are to say that he was left behind in Yorkshire in apprenticeship. The people of London are not directly aware of the zombie infestation of the North. Of course there are stories, and people who travel to the North on business are sometimes maimed or killed, but they prefer to speak of it as highway men. 'Tis less fanciful and so less likely to put us in one of Hoxton's lunatics asylum (there are as many as three right by our doorstep, so we must be careful!) But it is respectability more than the fear of the lunatic asylum that motivates our lie. For Henry did not die at the hands of zombies. He has married one.

All this leads nicely up to A Vindication of the Rights of Zombies:


It has long been my impression that our world is riddled with inequalities both in nature and in our treatment of each other. What has never been till now quite clear to me is how little those we treat as inferiors owe their inferiority to nature and not prejudice. In some cases at least it is obvious that it is our societies' treatment of them that has rendered them inferior. (I think that French manners, in particular, are much to blame for this.) Such is the case, I am now convinced, with zombies. Is a zombie by its nature a brain chomping, limb dropping fool, or has it been forced to become so by the prejudices of our society?