The Two Marys: A Conversation Piece 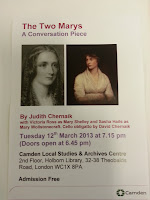 Last night saw an encounter between Mary Wollstonecraft and Mary Shelley, a rare one-off performance of The Two Marys: A Conversation Piece.  Sasha Hails played the mother, speaking with the wisdom of the afterlife, and Victoria Ross the daughter, still in the first grief of her widowhood in her mid-20s.

The setting was the very undramatic Camden Local Studies & Archives Centre. (The Centre is also hosting a temporary exhibition on historical religious buildings within the borough, some still extant, others demolished; this is exactly the sort of display that needs to be thoroughly preserved in the etheric afterlife. Roll on, digital humanities.) The Polygon, where Wollstonecraft spent the last period of her peripatetic life, and where her equally travel-hungry daughter began hers, lies within Somers Town, and of course St Pancras plays a key role for both writers, so Camden has a legitimate claim on them.

The two Marys were accompanied by David Cherniak's cello obligatto. The author herself was there: Judith Cherniak is an American long settled in London, who stamped her mark on the culture of the capital by setting up Poems on the Underground. (There's a celebration this Sunday at Keats House.)

I found the music mournful and the performance poignant. It begins with the young widow writing to Mrs Mason, her mother's former pupil who in turn offered maternal care to the Shelley entourage when they reached Pisa. (We've looked at before at this Lost Daughter, who started life as Margaret King.) She bemoans her fate and describes her distress, all alone without a friend in the world, or so it seems to her. The depths of her mourning embarrass those around her, both the English and the Italians. If only she could speak with the mother she never knew! And so the elder Mary arises from the chair in the corner, and approaches her daughter. They converse. They explain their lives to each other. They bond. And the audience sees the strong similarities between these strong women who never met.

Apparently the two-handed show first saw the light in September 1997, the bicentary of the Marys' birth and death, at the National Portrait Gallery. Wouldn't it be marvellous to put this on again? Maybe somewhere a little more atmospheric than the municipal library. Newington Green Unitarian Church, for example, site of the miraculous manifestation.

Two months after Shelley's death, Mary Shelley fights off her anguish for the sake of her remaining child. She clings to her books: Shelley's poems; the works of her father, the philosopher William Godwin; the feminist writings of her mother, Mary Wollstonecraft, who died shortly after giving birth to her. In her despair, the young Mary pours her heart out in a letter to an English friend who was her mother's first pupil. If only she could conjure up her mother from the past, if only she could speak to her for an hour...