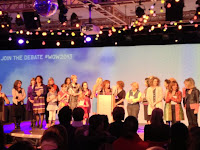 Mary Wollstonecraft inspired one of the entries in the newly released Fifty Shades of Feminism. "There's Something About Mary" is Bee Rowlatt's paean, and a taster of her book to come. On Saturday night, there she was at the Clore Ballroom in the Southbank Centre, being introduced by Sandi Toksvig. The readings were done in pairs: Bee read from the entry by Martha Spurrier, and the human rights lawyer returned the favour.

Mary Wollstonecraft was a woman so far ahead of her time that we are still living in her dust trail. She was a worldwide troublemaker, and a sea-faring single mother.

The audience lapped it up. "What would Mary do?" is the new motto.

The Virago website is (at time of writing) oddly unhelpful, but Amazon (for better or worse) has the regular description and GoogleBooks has what looks like a full list of contributors. Trusty Foyles was there on the Southbank spot, selling the elegant grey hardback. Behind the stage curtains, the contributors were all signing each others' copies.

The Women of the World festival, a three-day extravaganza over the past weekend, was definitely the biggest and glitziest of those events we rounded up for International Women's Day. But the others were good too, and there is still the sculpture walk to look forward to on 16 March.