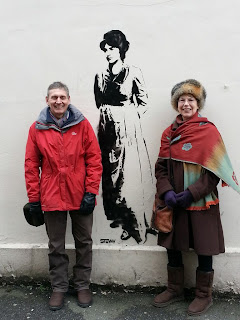 
Mary on the Green, the group campaigning for a statue, and Andy Pakula, the minister of the church at the heart of the village that changed the world* (and expanded Wollstonecraft's life), both bask in the reflected glory of the rather lovely life-sized image.

In the weeks since International Women's Day, the stencil on the wall has attracted a lot of publicity, as well as pilgrims and visitors. Here's a round-up (including interviews with yours truly):

On a Stoke Newington corner, astride the New Unity Church railings, a banner proclaims ‘The Birthplace of Feminism’. In this small, Unitarian congregation beats a radical heart. Here, amongst the pews more than 250 years ago, sat Mary Wollstonecraft.

Last weekend, a mysterious portrait of the radical feminist appeared on the wall of the Church. The stencil, designed by graffiti artist Stewy was put there on International Women’s Day to celebrate the palpable influence Wollstonecraft made on the Newington Green community and far, far beyond.
Stewy’s painting also acts as a ghost-like trace, spearheading the path for a more lasting tribute in Stoke Newington. Roberta Wedge, local activist and member of the ‘Mary on the Green’ campaign, represents that hope with plans to build a statue of the feminist on Newington Green.
“I always say to people, if you were raised by a woman who could read and vote and work, then you owe something to Mary Wollstonecraft,” says Wedge.

The mural, which is the work of street artist Stewy – whose identity is unknown – emerged as events were staged in Newington Green to raise money for the statue and to celebrate International Women’s Day, which was last Friday.

Andy Pakula, minister of the New Unity congregation based at the chapel, said: “I hope we can leave it here because we think it’s fabulous. There’s different issues about street art, but she’s our guiding spirit. You’ve seen in the US where images of Jesus appear on toasted cheese sandwiches, well for us this is about the best that could happen to have Mary show up. She’s inspired us to work for justice in the world and we absolutely support the campaign for a statue. We would like to see a Mary Wollstonecraft centre for feminist studies in Newington Green one day.”

Writer Bee Rowlatt, 41, who is backing the campaign and recently published a chapter about Wollstonecraft in a new book titled 50 Shades Of Feminism, said: “It’s just unbelievable that there’s no permanent memorial to this incredible woman. The mural is really inspiring. She’s right there life-size on a building where she used to go. We feel like she’s appeared among us and we hope this is a small step towards getting the memorial.”

A MYSTERIOUS apparition on the side of the New Unity church in Newington Green caught the eye of passers-by when it appeared overnight. But it is not the “Mary” that some might expect. Instead, it’s a graffiti stencil of Mary Wollstonecraft, the influential 18th-century author and staunch advocate of women’s rights who was inspired by sermons at the church.

As a young school­mistress Wollstonecraft used to attend the New Unity church and its radical sermons were integral in shaping her political stance. Street artist Stewy was inspired by her message to create the piece. “I’ve been aware of Mary Wollstonecraft’s connection with the Unitarian Church for many years,” he said. “The placing of the image, where she may have walked, was important to me and I decided to make a small edition of 25 screen prints taken from the stencil to help raise money for ‘Mary on the Green’.”

New Unity Minister Andy Pakula said ‘This is a mysterious apparition of the mother of feminism - a daring figure who continues to inspire us in the fight for freedom and justice for all people. Without her spirit, it is unlikely that we would have stood forward so boldly for equal marriage, as we have in recent years. Mary's spirit has been with us always. Now her image is as well!’

Fans of famous feminist Mary Wollstonecraft are celebrating her surprise appearance in the form of graffiti on the side of a church in Newington Green. The stencilled image of the 18th century “mother of feminism”, by street artist Stewy, is a bonus for a local campaign to get a statue of Ms Wollstonecraft erected in the borough.

Islington-based movement Mary on the Green tweeted a photo of Stewy’s artwork, saying: “What a boost to the campaign! Mary manifests on NG church @newunity.” Newington Green Action Group set up the initiative in 2011 to make her life and work more accessible to local people.

Campaigner Bee Rowlatt said: “[Ms Wollstonecraft] is an internationally renowned champion of women’s rights and there’s no statue to her anywhere." Ms Wollstonecraft, author of A Vindication of the Rights of Woman, lived locally and attended the “radically-inclusive” New Unity church during her lifetime.


and even in the the newsletter of the National Museum Directors' Council:

Street art evens up London’s representation of famous women: The image is clearly based on the John Opie picture of Wollstonecraft, which is on display in the National Portrait Gallery.  Mildmay’s Labour councillor Kate Groucutt says “I absolutely want it to stay. We’ve had confirmation from Hackney Council and they can’t remove it without checking with the owner, and that’s the church.  It’s not going to be painted over, we have secured that.” There are only a handful of statues to women among the hundreds in London.


And the image is to be found as far afield as the United States UU World magazine:
British Unitarians rally to save faith from extinction  by Donald E. Skinner

Unitarians in London gathered next to an image of 18th century Unitarian writer Mary Wollstonecraft. The image was created recently on the side of the Unitarian Chapel in Newington Green in north London, where efforts are underway to raise money for a statue of Wollstonecraft.

*************************
*The Village that Changed the World is the title of the beautifully illustrated little history produced by the Newington Green Action Group. It's available directly from the charity and no doubt from the online mega-retailer of your choice.
The photo above is, for a change, by me, of a pair of warm churchgoers on a cold day.
at 20:31