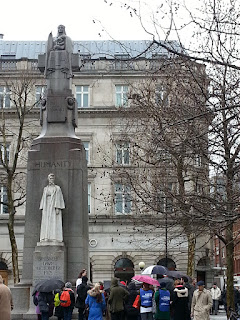 There is no statue to Mary Wollstonecraft anywhere in the world. There is, however, a sprinkling of public memorials to prominent women in central London. The local chapter of United Nations Women organised a walking tour of half a dozen of them last Saturday. Despite the persistent rain, a goodly crowd assembled, including a pair of self-possessed twelve year olds. Each statue had its designated champion, telling us about their chosen person, from national heroine to forgotten obscurity. Here is the group, listening to the story of Edith Cavell, at the impressive memorial outside the National Portrait Gallery. I even found the opportunity to expound for the benefit of Mary on the Green.

The walk started in Bloomsbury at Tavistock Square, wandered via Lincoln's Inn Fields to the Strand, along to Trafalgar Square, then Pall Mall and Whitehall and finally Parliament, a satisfying circuit through literary, legal, and legislative London.

There are others: Time Out lists Violet Szabo and Sarah Siddons. The labour of love that is London Remembers provides endless browsing fascination; here's their page on the military monument. And the Victorian Web is very good between 1837 and 1901, as e.g. with Florence Nightingale.

I've spent ages and ages making a Google Map, Statues of prominent women, with links and everything. Do have a look.