What a great weekend! Who needs to traipse all the way from London to Hay-on-Wye, when such a panoply is laid out like a tempting Clissold Park picnic?

2011 is the second Stoke Newington Literary Festival, created to celebrate the area’s long and influential literary history and to keep the spirit of radical thinking, debating and story-telling alive.This year, we’ll be shining the spotlight on some of the people that have helped put Stoke Newington on the cultural map, in particular Edgar Allen Poe and Mary Wollstonecraft.

How fantastic is that? And then the description of our event: 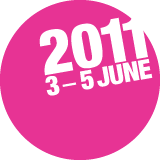 Mary Wollstonecraft moved to Newington Green in 1782 where she published books on girls’ education and civil rights and wrote A Vindication of the Rights of Woman, a keystone in the history of women’s rights. Come and find out about local projects celebrating Britain’s first feminist, hear the ‘Fragments & Monuments’ artists talk about their new book and participate in Strangers in the Neighbourhood, a collaboration between Anna Birch and Taey Iohe and meet Roberta Wedge, Mary Wollestonecraft blogger.

When I first saw their website more than a month ago, I wrote to the organisers and suggested they correct the spelling -- such a difficult name. So now the front page is fine, but the event description still contains the typo, and doesn't list the name of my project (this blog title) or even Mary on the Green per se. Oh well.

The event itself went well. My various Twitter publicity may have had some effect: I believe the tickets were sold out, and certainly the gallery space looked full. Close to 100 people, I'd guess. It was Anna Birch's initiative, so she and her collaborator Taey Iohe got most of the time, which is fair enough. They have a new book to flog, which is what literary festivals are usually all about.

There were two Mary-actors in the big white square petticoat structures, representing cages and confinement. They served the tea, mostly. Anna described her projects and read some letters with Taey, Anna in the voice of Mary and Taey in that of a Korean artist whose life bears certain similarities. I reprised my IGNITE talk -- that is, I provided a brief illustrated biography -- and spoke for another five minutes on my Twitter adventures, this blog, and projects going on around the world. (In fact, in the audience we had a woman about to embark on a Mary-pilgrimage, with baby and book contract. More on her another time [update: Bee Rowlatt is here].) Joe Caluori, the Islington Labour councillor, spoke about Newington Green Action Group and the Mary on the Green project. I circulated a sheet for email sign-ups. Hilary King sold books and collected donations for NGAG afterwards. No time for Q&A from the audience, alas, but aside from that, everything went without a hitch. Roll on, next year.
at 00:59

Email ThisBlogThis!Share to TwitterShare to FacebookShare to Pinterest
Labels: life, London, Mary on the Green, talk