Hello everyone, I'm back. A most amusing summary of Mary Wollstonecraft's life and legacy has crossed my desk.  I decided to ask for permission to bring it to you verbatim, which Ashley Lister, co-ordinator of the Blackpool writers collectively known as A Dead Good Blog, promptly and kindly granted. See? The internet can be a pleasant place. I don't usually reproduce blog posts, but since it's time to start anew, perhaps it's time to start a new ... habit? Practice? Tradition? If I enjoy a piece of writing, why not see if I can grant the same pleasure to my dear readers, as well. So here goes "The beginning is always today", by poet and writer Vicky Ellis:

"I hate clever women...they are only troublesome."  This is not a quote from my favourite writer.  These are the words of Henry Fuseli: artist, visionary and twunt.  He was also 'unhelpful crush #1' for Mary Wollstonecraft, author, feminist and lover of twunts.


'Security of property! Behold in a few words, the definition of English liberty. And to this selfish principle every nobler one is sacrificed....'

'Virtue can only flourish amongst equals'

“[I]f we revert to history, we shall find that the women who have distinguished themselves have neither been the most beautiful nor the most gentle of their sex.”

“My own sex, I hope, will excuse me, if I treat them like rational creatures, instead of flattering their fascinating graces, and viewing them as if they were in a state of perpetual childhood, unable to stand alone.”

“Taught from their infancy that beauty is woman's sceptre, the mind shapes itself to the body, and roaming round its gilt cage, only seeks to adorn its prison.”

From A Vindication of the Rights of Woman

Clearly she was a rational, keen-minded individual with a, sadly, contemporary-sounding axe to grind.  But these words, marvellous as they are, do not encapsulate what was wonderful about Mary Wollstonecraft.  Mary was, in the nicest possible way, a bit of a fuck up.  She had a habit of falling for the least suitable man to hand.

Now these men were respected in their professions.  They were intellectuals, noted for their work.  They were no doubt fascinating in some way or I doubt they would have caught her attention.  They were not, however, particularly nice men.  Take twunt #1 above.  Fuseli was an interesting chap.  Repressed sexuality aside, he helped define the Romantic movement and he did a reet good incubus, so he did.  He shared a deep Platonic relationship with Mary which, for her part, turned into love.  Fuseli was married.  A slight hitch.  Mary decided that she could work around that and asked his wife if she'd mind terribly if she moved in with them, seeing as she had such great affection for Henry and all.  Sophia, Henry's wife, failed to see the practicality of this solution and forbade Mary from ever seeing Henry again.  Henry had no further contact with Mary.

You could argue that Mary was being unrealistic, or even that she was a little bit mad.  I think not.  I think she was working within the remit of the manifesto which she had written.  The first quote above makes it clear that she believed that the laws of property interfered with 'noble principles'.  The definition of property can be extended to include notions of ownership in relationships.  As a fiercely independent woman, her suggestion makes sense in a way that was centuries ahead of its time.

After this humiliating event, Mary travelled to France, to enjoy her fame as a supporter of the Revolution.  There she met the dreamboat, Gilbert Imlay, aka twunt #2.  He was a speculator, and had an interesting approach to diplomacy, running British blockades of French ports while acting as ambassador in Paris.  He mirrored this approach in his dealings with Mary.  A lusty love affair led to pregnancy.  She had his child.  He became restless.  He left her with the baby in Paris and moved back to London.  She followed him to London.  He largely ignored her.  She tried to kill herself.  She recovered and agreed to go on a business trip across Europe, with her baby, on his behalf.  She returned to find him shacked up with another woman.  She tried to drown herself in the Thames.

Again, you could argue that Mary was being a little bit naive by trekking across to Sweden on his behalf.  At the same time, however, she wrote to him frequently.  Her letters to him were collected and read by her later husband, William Godwin, who said of them: "If ever there was a book calculated to make a man in love with its author, this appears to me to be the book."  The letters allowed Mary to make a clever and emotional plea for Imlay's affection, ranging between vulnerability and independence.  Here was a woman who capable of using her writing like a spell to enchant her would-be lover.

But Imlay was a bad egg.  Mary's letters didn't entice him back towards his responsibilities, however alluring their content, and Mary was forced to come down on the side of independence once more.  Those words which she had sent out into the world found their enraptured audience, however, in William Godwin, writer and philosopher.  The pair hit it off and soon she was pregnant again.  This time the couple married.  Seems like a good idea right?  Well as it turns out this marriage only drew attention to the fact that she hadn't been married to Imlay when she bore his child.  English Society was not too chuffed and a few of her friends found that the stench of scandal was more than they could bear.

Nevermind, Mary and William set themselves up in the Polygon, a pair of ajoining houses which allowed them to be independent and communicate by letter.  Superb.  Their eversomodern plan was working out splendidly until Mary died of septicaemia 11 days after giving birth.  Bugger.

William published a biography of Mary a year after her death, detailing her suicide attempts, the hopeless love affairs and illegitimate children.  England was scandalized once more.  Her name was mud until the Feminists cleaned her off and called her Mother. 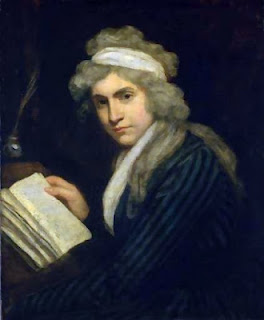 So there she is.  Mary Wollstonecraft.  Intellectual rebel.  Emotional hazard.  Fierce, fragile and expressive.  Role model.  Icon.
at 10:00