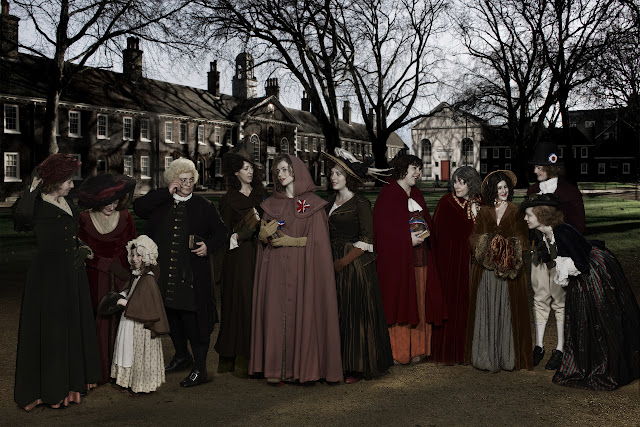 If you missed "Mary Wollstonecraft and the Newington Green Dissenters, 1784" when it was at the Museum of London, fear not! Hidden, the magnificent series of photo-montages by Red Saunders, is up once again. This time it is at the Impressions Gallery in Bradford, the other side of Yorkshire from Beverley, where Mary spent happy childhood days (and fell in love with Ardent Jane and her library).


Here is our previous post about Hidden, and the artist's thoughts on the history not taught at school.


PS And there's an article by Paul Furness in the Socialist Worker: Hidden: Illustrating the secret history of workers’ resistance, describing Mary wearing her rosette for the French Revolution.  He also lists three new photomontages: Captain Swing, the agricultural riots in the 1830s; Hilda of Whitby,  a 7th century nun "who insisted that girls had as much right to education as boys", and:

Then we meet the Grindletonians. These were mainly women from the Yorkshire Pennine village of Grindleton who challenged the accepted world view in the run up to the English Civil War. They argued that a new way of living was possible in this old world if only the people living in it would seize it back from those who run it.


The picture shows a gathering of radical soldiers and villagers seated together in a clearing at dusk. They listen intently to a woman who tells them that a new world is not just possible but is within their reach if only they would stand up as one and take it.It was little gatherings like this that mushroomed into the Civil War—in fact a revolution where the king’s head came off.