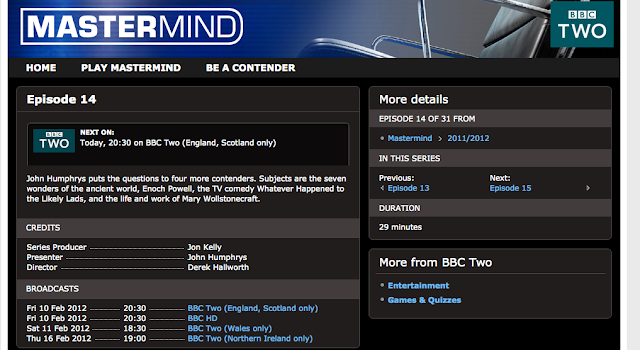 For those of you with access to UK television, take advantage of a quiz show featuring Mary Wollstonecraft.She is listed as a specialist subject on episode 14 of Mastermind, which is screening in a couple of hours (20:30 GMT) in England and Scotland (tomorrow in Wales, Thursday in Northern Ireland). You might be able to catch it on iPlayer, if your computer is deemed to be living in the right jurisdiction.

What a weird competition combination:

John Humphrys puts the questions to four more contenders. Subjects are the seven wonders of the ancient world, Enoch Powell, the TV comedy Whatever Happened to the Likely Lads, and the life and work of Mary Wollstonecraft.

Shouldn't "Ancient World" have capital letters? At least they spelled her name correctly. It is a tough one.