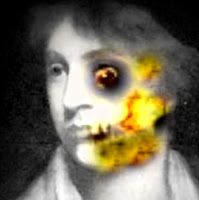 I have written before of the zombie-fighting adventures of Mary Wollstonecraft (here), and also of the strange attention paid to some  Undead republicans by state forces on the day of the Royal Wedding (here). Now, thanks to the kind permission of Sandrine Berges -- philosopher-queen by day, but by night, masked crusader against the Undead, not to mention discoverer of the lost manuscript of A Vindiciton of the Rights of Zombies -- we can see our heroine's brave face at the time of another pan-European crisis, one that renders today's financial collapse of but little weight in comparison. Closer to home, "A Very Zombie Love Affair" clears up the mystery of the Fuseli menage a trois:

I am sitting down to write this half-way between Paris and Lille which I hope to reach before tomorrow night. I am tired from the journey, and being with child has affected my capacity to reminisce – nonetheless, dear loyal reader, I will now attempt to bring back with words some of the painful events that have plagued me since I last wrote here.

'Tis two years now since I fled infected London for Paris – two wonderful, peaceful years, when the only upsetting events were the occasional loss of a dear friend to the guillotine. 'Tis in Paris that I met my dear beloved Imlay, adored companion and father of my child to be. France is mercifully free of zombies. I believe the revolutionary practice of using the guillotine often and plenty has so far prevented a general infection of the country: the blade that slices through the neck is democratic enough in that it kills zombies and royalists alike. M. Guillotine, I should note, was one of the early proponents of the view to which I fully subscribe that in order to destroy a zombie and prevent it from rising again, one should separate its head from its body.

Back in London, my experience with educating zombies so that they may claim their rights having failed rather than succeeded, I retreated for a while to my own affairs. After a spell in Ireland, where I was put in charge of protecting six children from their zombified mother, I came home to start a school with my beloved Fanny. Such happiness, however, would not last. Fanny was bitten, by one of my own sisters (a story I shall tell on a later occasion). I entreated her to leave England for Portugal, where I hoped the weather would be more favourable to her condition.

I soon received reports that she was worsening, and still in hope that I might assist a recovery, I decided to join her. I lost no time in setting out and endured a tolerable passage in a ship ridden with zombies. My days were spent cutting through necks and limbs, and my nights locked away in a tiny, rank smelling cabin. As soon as I set foot in Portugal, I realised that there could be no hope. Not a single living soul remained: all had been zombified, which should have come as no surprised had I reflected on the extreme catholicism of the natives. My dear Fanny expired in my arms, after I had decapitated her.

Desolate, I returned to London, whatever small lust for life I had left all but used up in slaying my way through the journey back. Fortunately, my good friend Johnson approached me and offered me work in which I was able to lose my sorrowful self. I reviewed, edited, translated, even wrote book, which, I am not afraid to say, gathered a little success of their own. Twas then also I met the treacherous Fuseli. Straightaway I was charmed by his wit, and his worldliness, and I do not flatter myself I believe when I say that he did not find my company unpleasant, at least at first. But as s oon as I had persuaded myself that he returned my affections, Fuseli found himself obliged to marry a relation whose sole capital were looks and an income.

Soon after the wedding – to which I was not invited – it became apparent to me that the young Mrs Fuseli was in fact entirely devoid of brains – except for the ones it was her practice to devour at breakfast. Yes, Fuseli had succeeded where I had so spectacularly failed: he had tamed a zombie and taken her for his wife. Full of admiration for him and pity for her, I immediately offered myself as complement to their household. I argued in a convincing enough manner that whereas he had apparently succeeded in training his dead wife so that he could use her body as he pleased without risk of infection, he must sorely miss the intellectual company of a real woman. I put myself entirely at their mercy, humbly requesting that they should take me into their home. To my great horror, Fuseli laughed in my face, and his wife growled at me in such a way that I came to fear for my life.

'Twas then I decided to leave for Paris where I have at last found bliss, in the person of Imlay, a tall handsome American (Fuseli is Swiss and Short), with whom I am expecting to start a family in a short few weeks.