Mary Wollstonecraft did venture beyond (what is now) North London, and this coming week over the next several Wednesdays I'll be exploring some of those connections. However, to round off this past fortnight's focus on Newington Green, here are two sketches by the kind permission of James Hobbs (www.james-hobbs.co.uk). I've never met the man, but his style of gentle colour and clarity appeals to me, call them grown-up architectural cartoons, and the next time I am near the Oxo Tower on the South Bank, I intend to pop in to Skylark Gallery and see what he has hanging there. 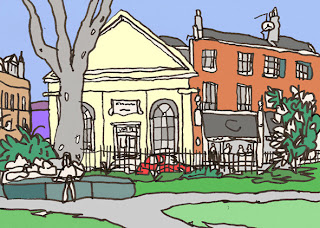 I like how the image focuses on the church building, but those in the know can positively smell the Belle Epoque patisserie next door, under the awning. James has work hanging there too, but do beware if you enter the building -- you won't be able to leave without having eaten something too good to be good for you.


The pastry shop wasn't there in the 1780s, of course; I wonder what was? The church was the centre of its community then, but it looked rather different. On its front now it bears the inscription "Erected 1708. Enlarged 1860", a phraseology that's the source of many adolescent chuckles. Aside from the Victorian schoolhouse, which is attached to the back and thus invisible in the sketch, the front was altered, so Mary would have seen the same building in a simpler guise. And in her day it didn't have a banner proclaiming "Birthplace of feminism". 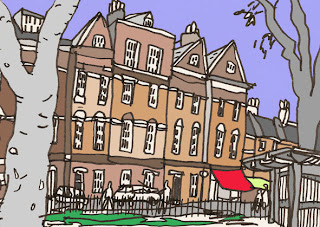 I suppose that label could equally well apply to the house of the minister, Dr Richard Price, one of the few Dissenters who could get away with preaching support for e.g. the American Revolution, and yet still have the ear of the king's men -- in his case, for his work on economics and statistics. His hospitality, and the warmth with which he supported Mary, are well known. He lived for decades on the west of the Green, in what was even in his day a 100 year old building, now the oldest brick terrace in London. Wouldn't it be wonderful if Dr Price's house could become the location for the Mary Wollstonecraft Museum, or Women's Leadership Centre, or Human Rights Academy? You heard it here first...


[Update: James writes about Mary and Newington Green on his blog here.] [Another update: I've never even met James, but I congratulate him on getting his works onto five uber-London notecards to be distributed worldwide. Thanks, IKEA.]